Ratings from guests at one Butlin’s resort increased by 20% after a refurbishment including windows and doors by Wrekin Windows.

Butlin’s resorts, once aimed at family summer holidays have now extended their season with an almost all-year offering of music and themed events, though families still make up the core of business throughout the main season. This means any replacement such as windows and doors in chalets presents a number of specification challenges that might be less common elsewhere. Not least of these is that the closed season for any refurb and refits is just six weeks and even then, occasional events can curb weekend working. 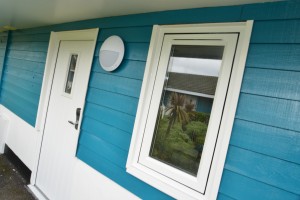 All of those challenges were in play when Wrekin Windows was chosen by the brand’s owner, the Bourne Leisure Group, to replace the windows and doors in 234 of the chalets at the brand’s Minehead, Somerset, resort, as Richard Camp, Regional Contracts manager explained:

“Bourne Leisure had seen the Profile 22 PVC-U Flush Sash system at a trade show and were impressed that, among other things, its flush design meant it could not be forced from outside by putting fingers under the sash.

“On the inside, window handles had to be non-locking, so no key to lose – and no risk of anyone forcing a window as a result. There were of course window restrictors for the safety of children. These were also fitted to the top of the frame so they were out of reach and almost out of sight. Similarly, with the doors, each had a chain but it was fitted near the top of the door and frame.”

The specification of the doors did offer one additional challenge, he added: “Each one had to have the original card reader lock put back on the new door and it had to be the correct one for every single chalet; just one on the wrong door and they would have had to re-programme every lock on the site.”

Wrekin Windows, part of the Epwin Group, completed the contract within the six-weeks and in time for a big Valentine’s Day event. However, that timeframe also included several weekend breaks, as well as fitters having to mesh with other workers replacing carpets, electrics, boilers etc. The only activity possible outside of that period was that the first week’s windows and doors could be delivered before Christmas and stored on site so that the fitters could begin on the first day back after New Year.

Richard Camp credited Butlin’s and the other subcontract workers for helping the entire exercise to go smoothly. 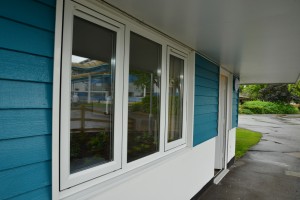 Guests at the resort since the refit were clearly impressed with warmer and brighter accommodation; Butlin’s is keen on gathering feedback from all visitors and reports that the rating for the refurbished premises showed an immediate increase of 20%. Butlin’s Head of Property, Ian Cutler said that every contractor’s performance is reviewed after each annual capital investment programme is completed. He continued: “We are planning our 2017 capital programme and we will be agreeing that plan in the very near future to enable us to plan appropriately for works to start in the autumn and early 2017. Wrekin are very much part of our thoughts.”

Of Wrekin and the contract itself, he said Bourne was impressed not only with the look, feel and quality of the windows, but also “how accommodating Wrekin are in getting the exact specification that Butlin’s requires.”

← Back to Case Studies